On Wednesday, November 13, 2019 all eyes will be on Bridgestone Arena in Nashville, Tennessee for the 53rd annual Country Music Association Awards. Always a much-anticipated event for those invested in the mainstream of the genre, this year’s ceremony is all the more so as the industry awaits the results of the Entertainer of the Year Award. Carrie Underwood, nominated for the second time in her career, is the only woman nominated this year (after a 2-year drought in female nominees) and at a time when inequalities within the genre are increasingly part of public and scholarly discussion. In an article written for Billboard magazine, Paul Grein reflected on the importance of an Underwood win: not only have there been just nine wins for a solo female artist or group since the award’s inception in 1967, but it has been 7 years since a woman last won Entertainer of the Year.

In addition to the attention surrounding this coveted award, it is a year in which a female artist leads nominations. Maren Morris has 6 nominations this year, including Album of the Year (GIRL), Female Vocalist of the Year, Single and Song of the Year (“GIRL”), Music Video (“GIRL”) and Musical Event of the Year (“All My Favorite People” with Brothers Osborne).

Perhaps more critically, this year’s ceremony promises to celebrate the legacy of women within the genre. At a time when women face significant barriers to opportunities within the industry, the 53rd CMA Award ceremony aims to spotlight the female artists that have contributed to the development of Country Music. Underwood will co-host with Reba McEntire and Dolly Parton who, as stated in the press release, “hold 124 CMA Awards nominations and 22 total wins, 11 of which are for Female Vocalist of the Year. In addition, the three superstars hold a combined 14 nominations in the Entertainer of the Year category, with Parton receiving the award in 1978 and McEntire winning in 1986.”

In anticipation of this year’s ceremony, SongData dove into the last 20 years of the CMA Awards. Focusing on representation within the nominations and amongst the winners of eight of the organization’s annual awards, the results below show increasing disparity in the nominations that echo the inequalities found on radio. In addition to considering the growing (and in some cases continued) gender imbalance in country music culture, this snapshot of the CMA Award history also considers racial inequalities amongst the nominees. The results show that artists of colour comprise about 1% of the nominations for certain awards. Much more work needs to be done with regard to racial and ethnic diversity within the genre, as well as in relation to representation of LGBTQ+ artists. This is true not just of the lead artists performing the songs we love, but also the community of songwriters that write them, the studio musicians that bring them to life, and the producers and engineers that shape their sound. We are only at the beginning of understanding representation within the genre; future SongData studies will aim to explore these aspects of identity.

Below are the results of this exploration presented through infographics; we have included the award criteria and 2019 nominees along with the analyses. The results can also be accessed in this 7-page brief.

We can then look at the Top 10 Nominees across all categories, the non gender-based categories and amongst overall winners. These lists show that Miranda Lambert, Carrie Underwood, and Taylor Swift have been the most nominated and successful women overall. 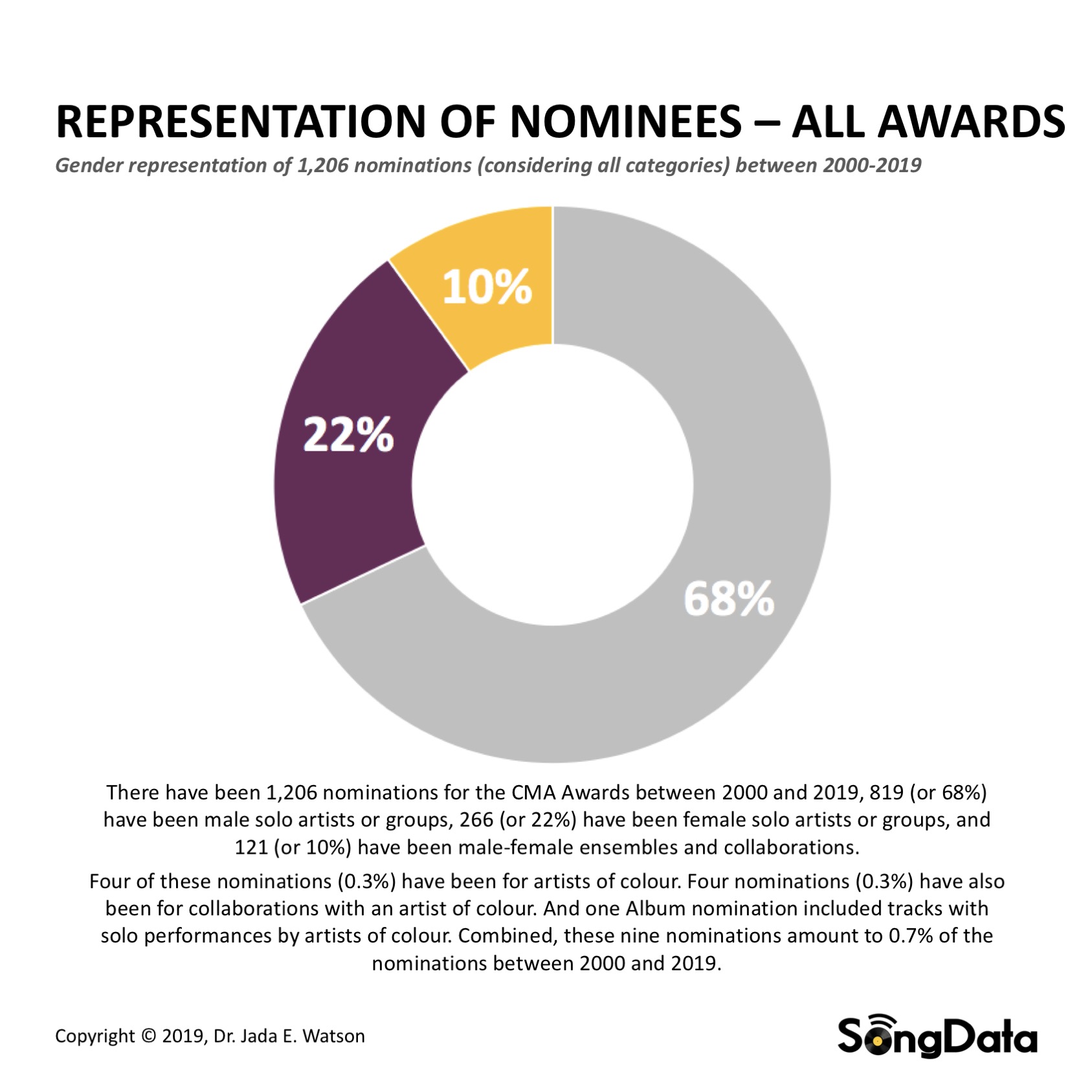 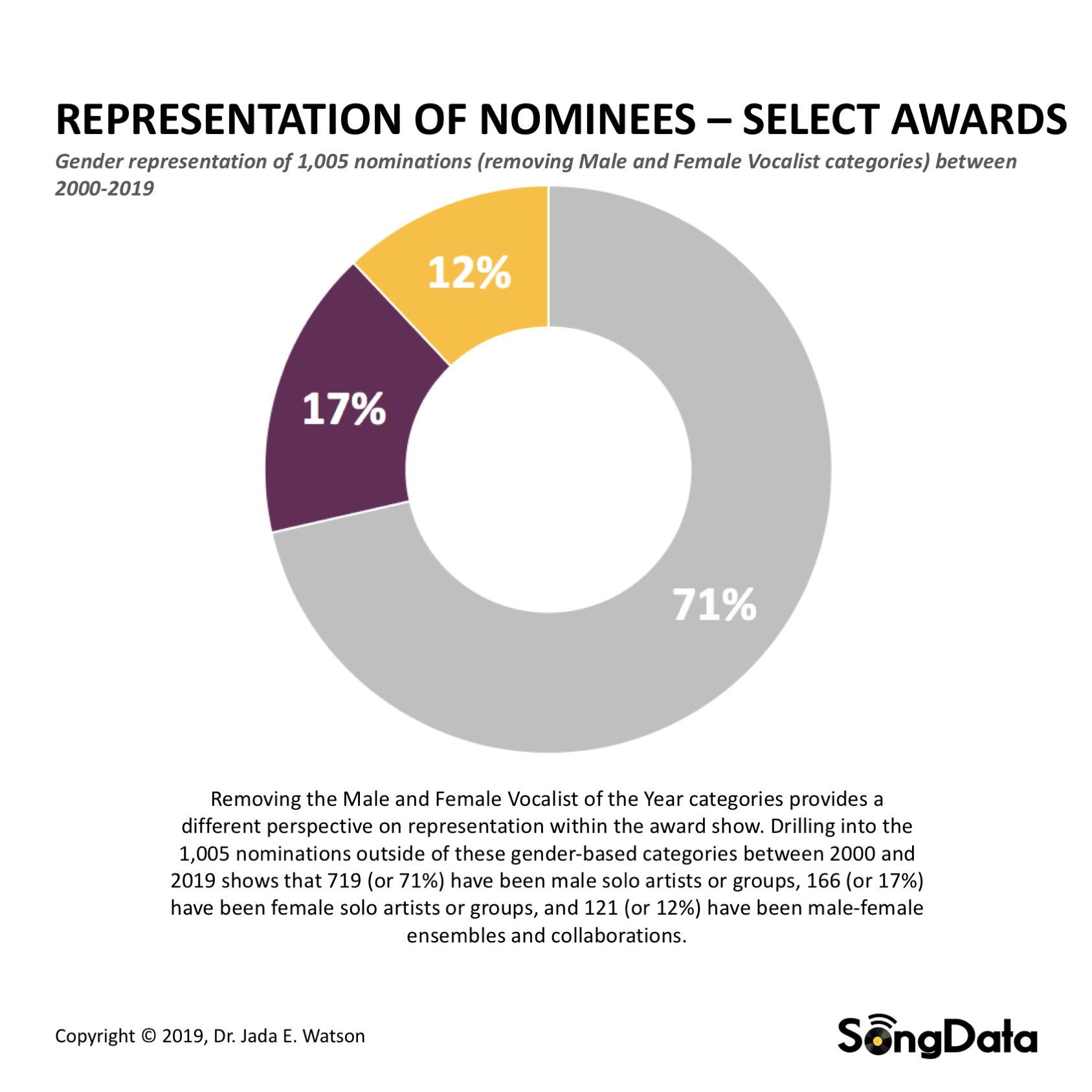 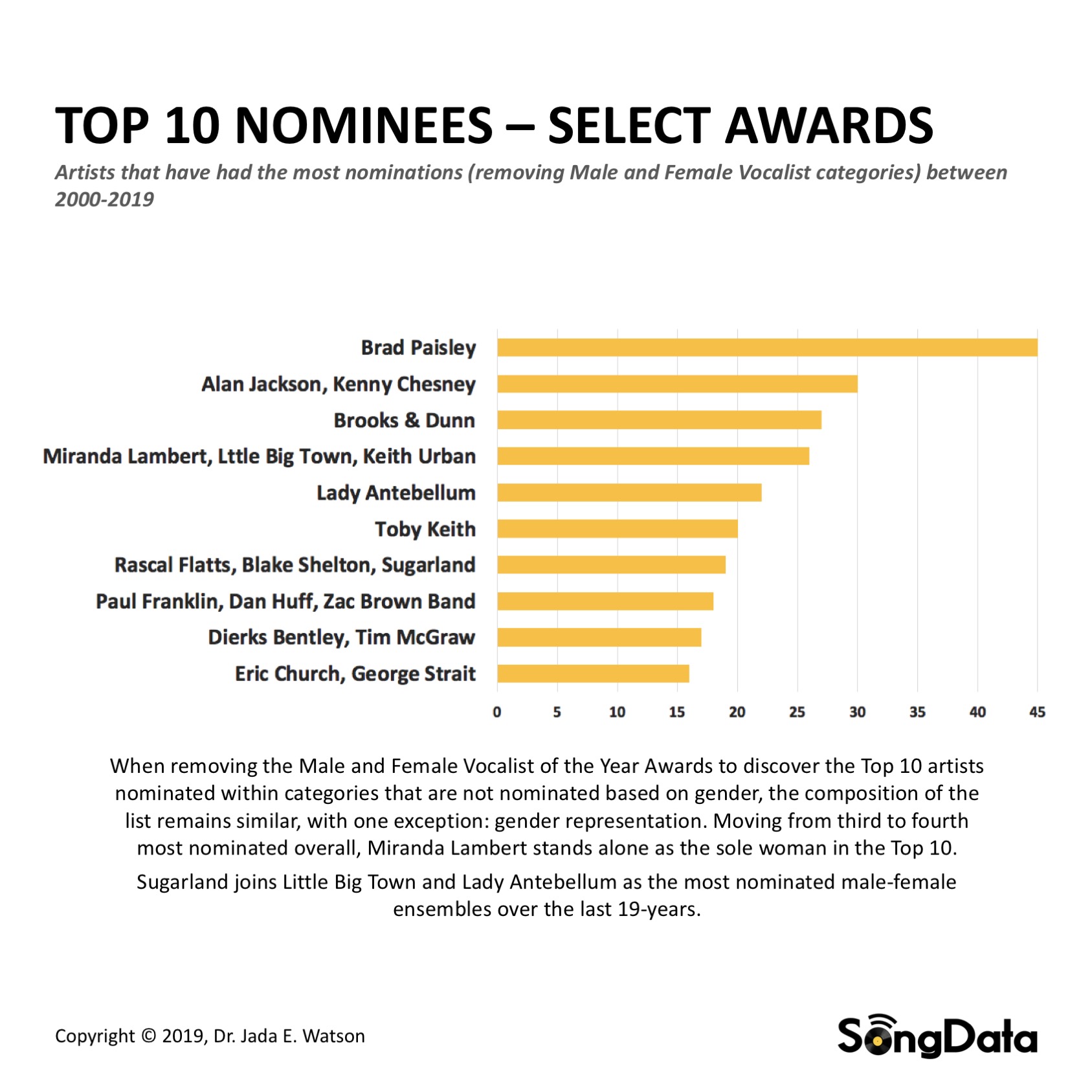 Video of the Year

This award goes to the artist and director for an original Country Music video not more than 10 minutes in length and that features the performance of not more than one song or medley.  Evaluation is based on all audio and video elements including, but not limited to, the artist’s performance, video concept and production. This year’s nominees include: 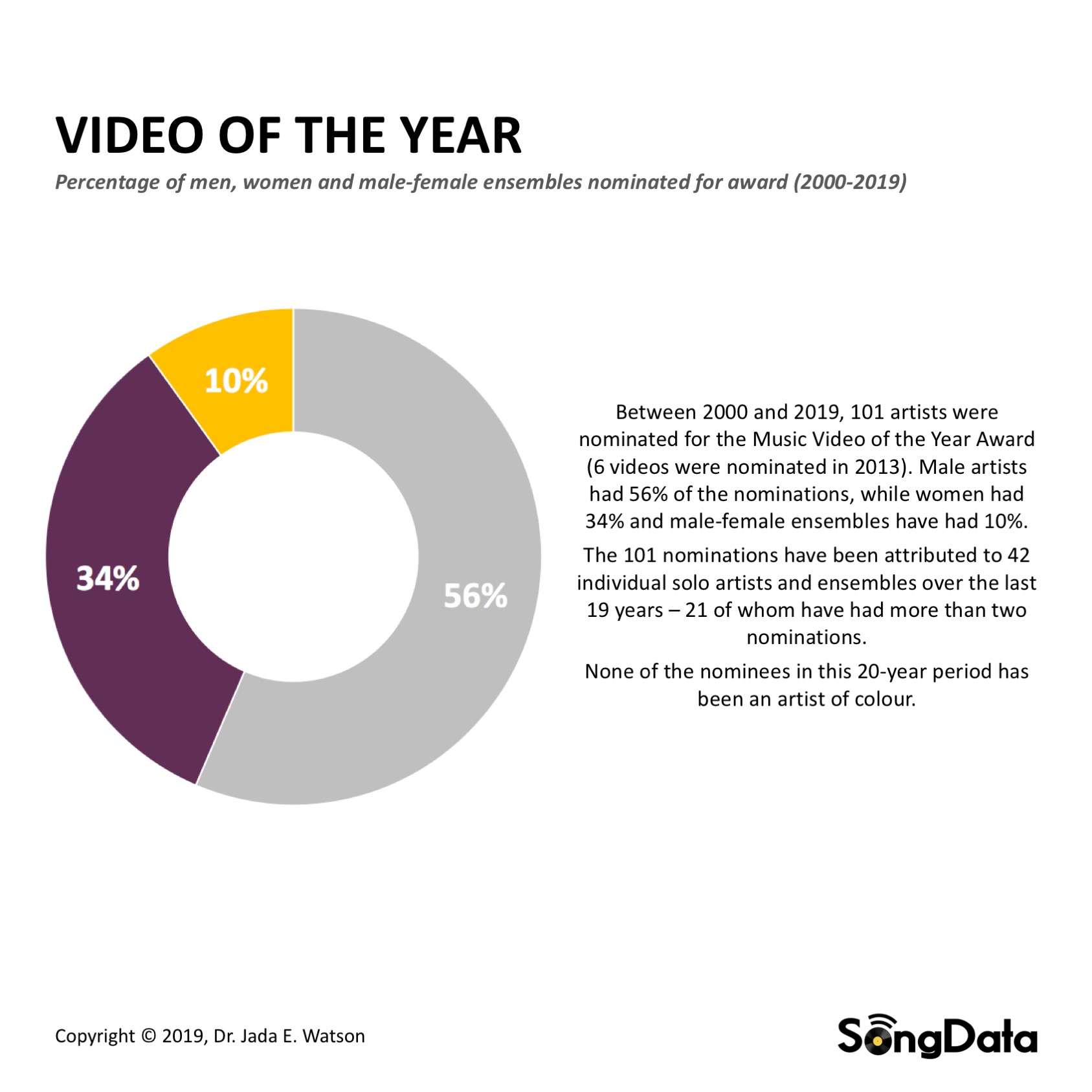 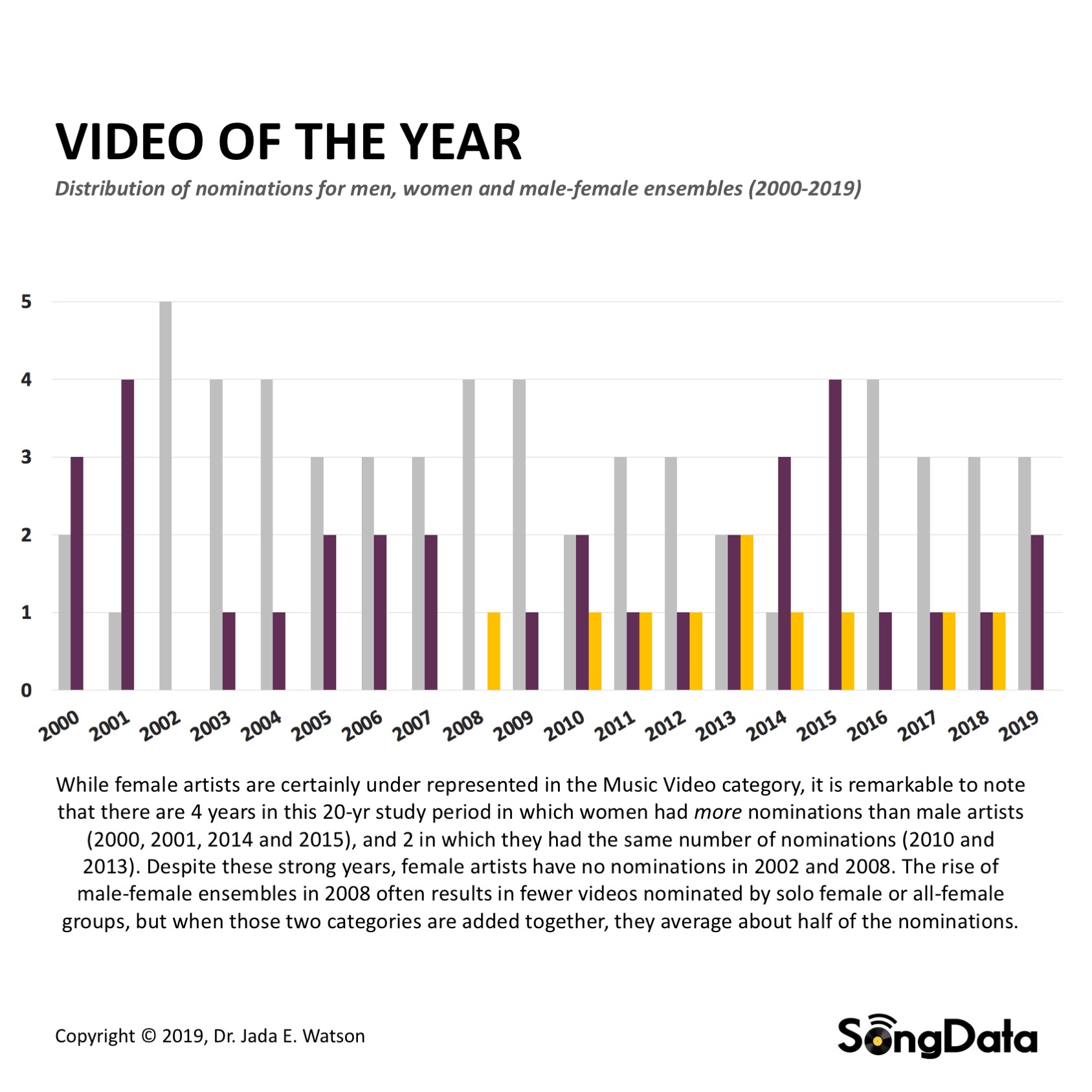 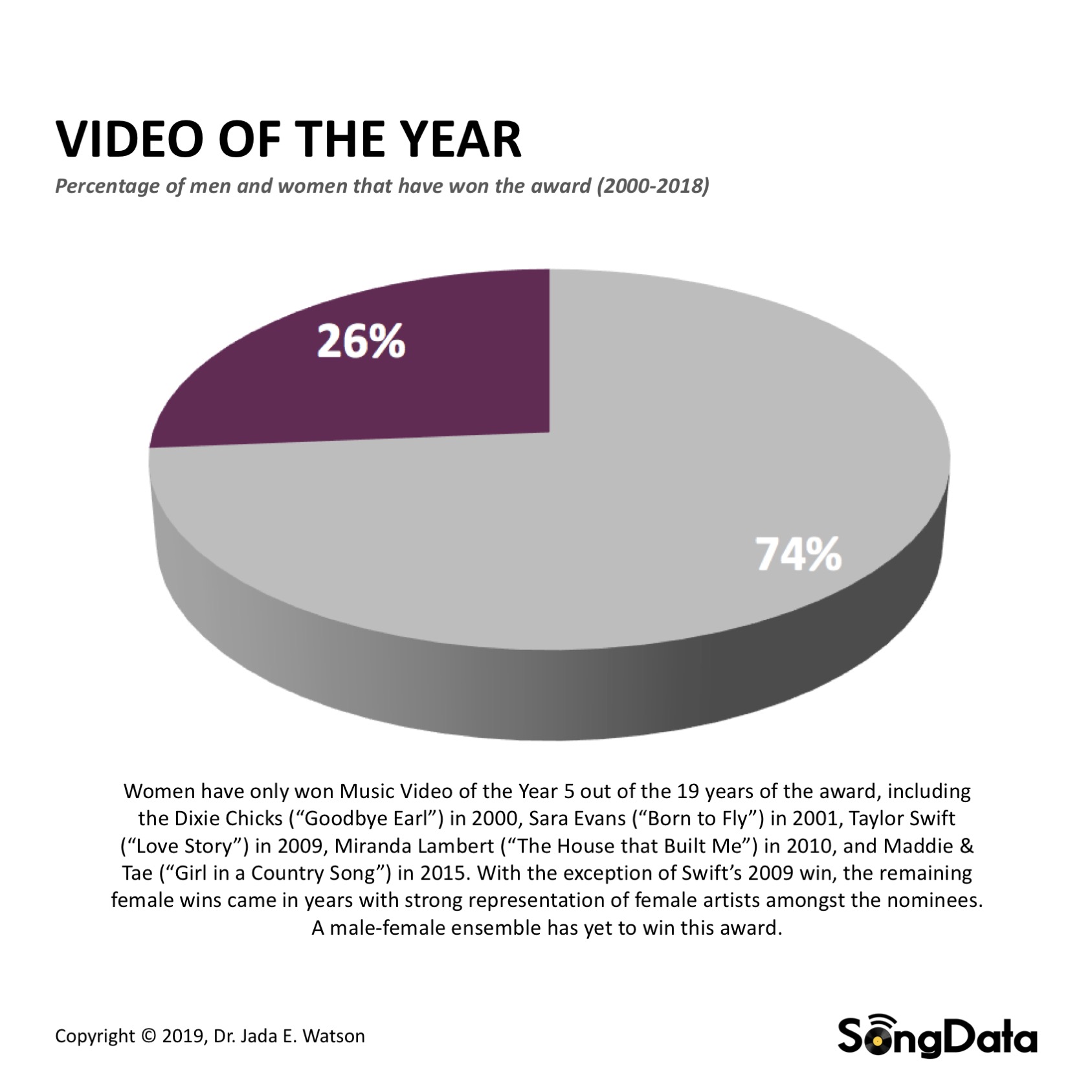 New Artist of the Year

This award goes to the artist, whether individual or group, who should be known primarily as a Country artist. The evaluation criteria indicate that the artist who has “demonstrated [for the first time] the most significant creative growth and development in overall consumption or chart activity, live performance and/or national media recognition related to the launch of their career.”  This year’s nominees include: 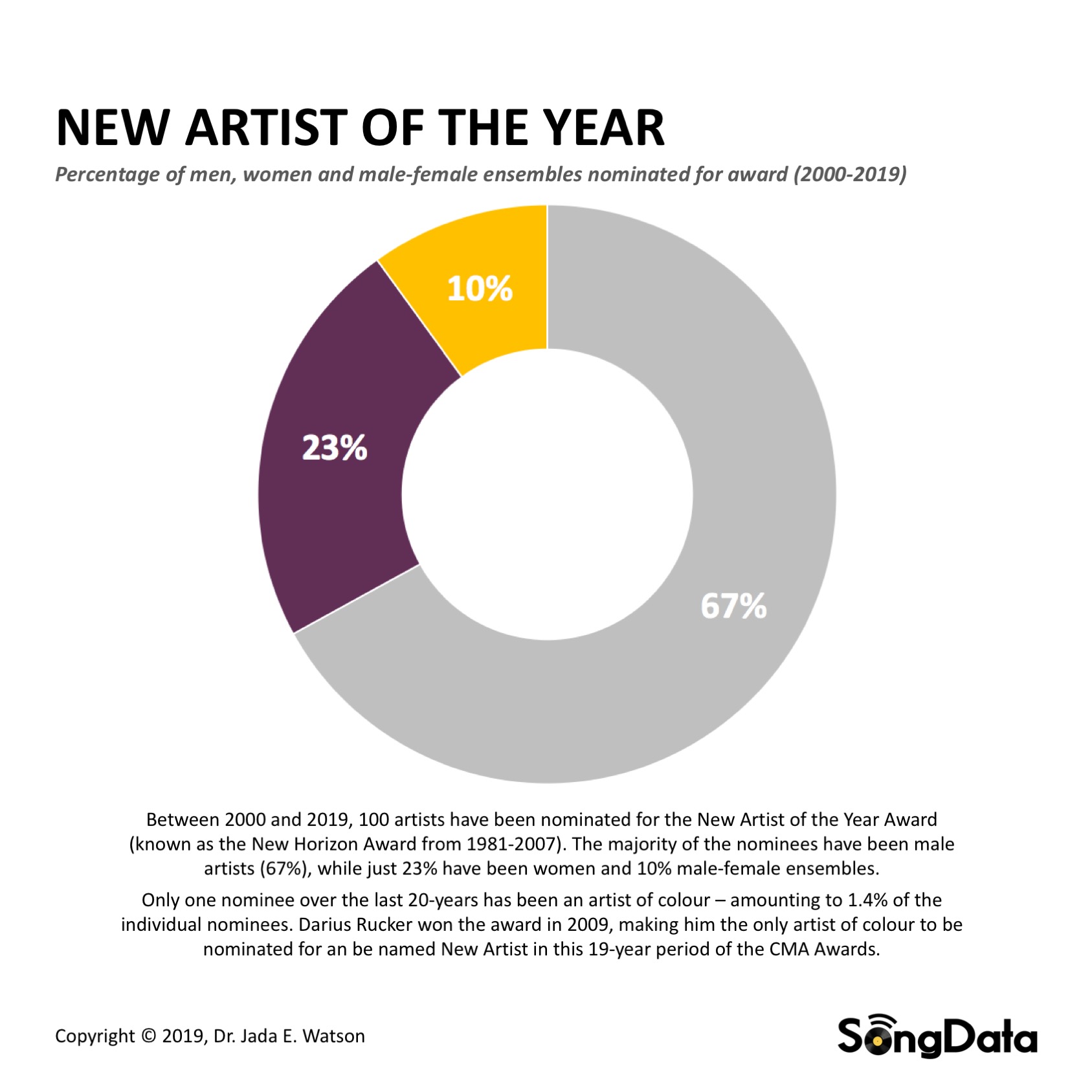 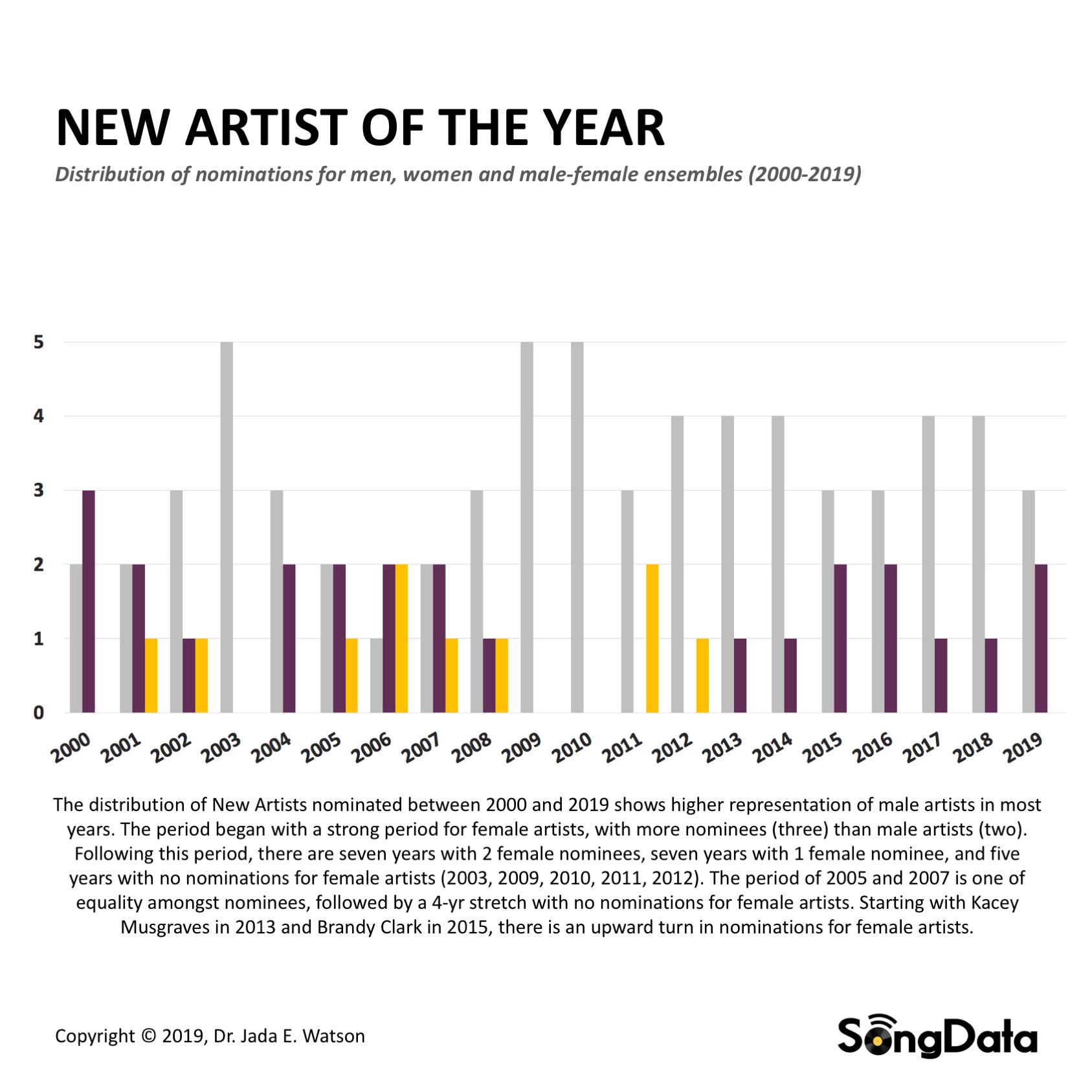 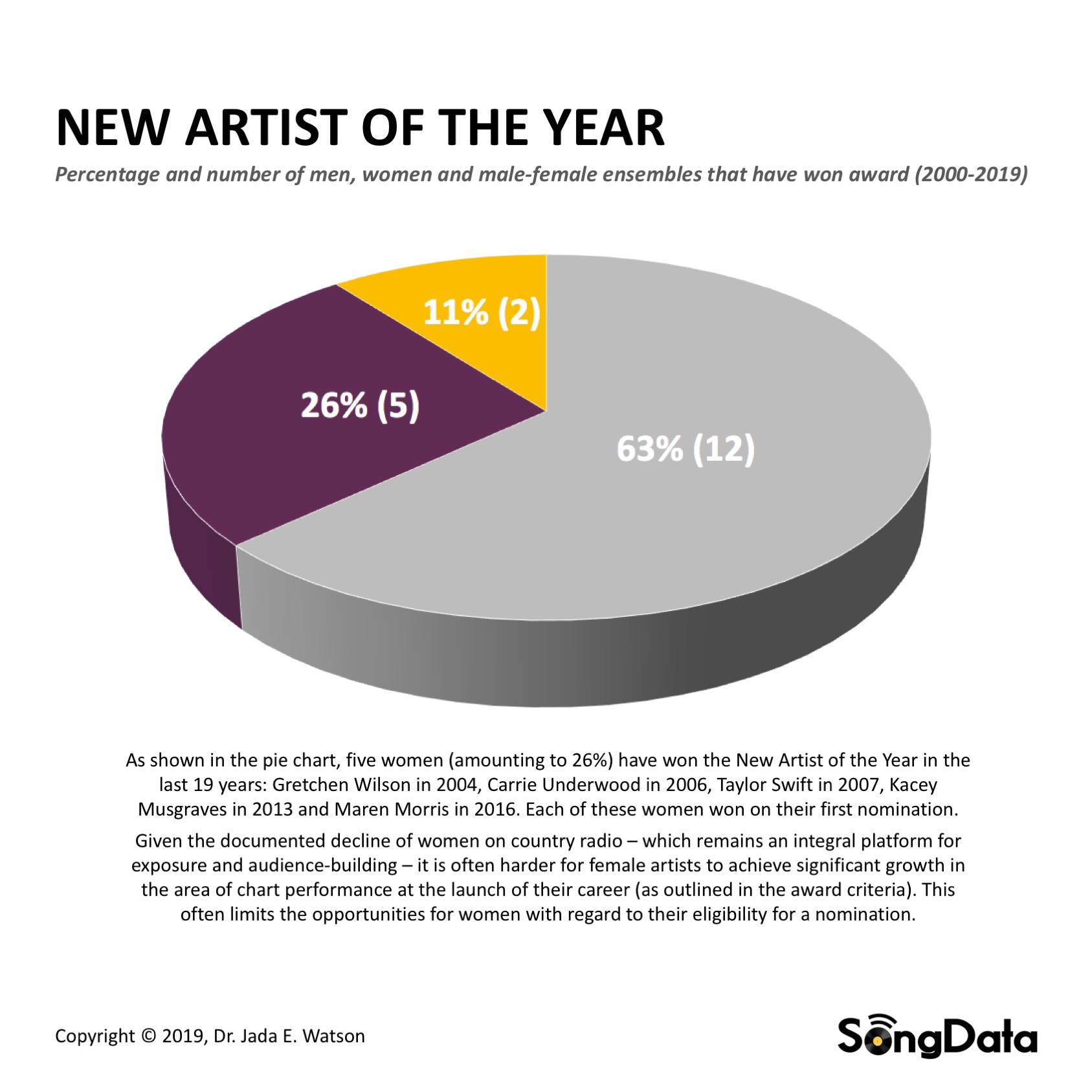 Vocal Duo of the Year

This award goes to the duo, which is defined as an act composed of two people, both of whom normally perform together and neither of whom is known primarily as an individual performing artist.  This Award is based on the musical performance of the duo as a unit on a Country single or album release. This year’s nominees include: 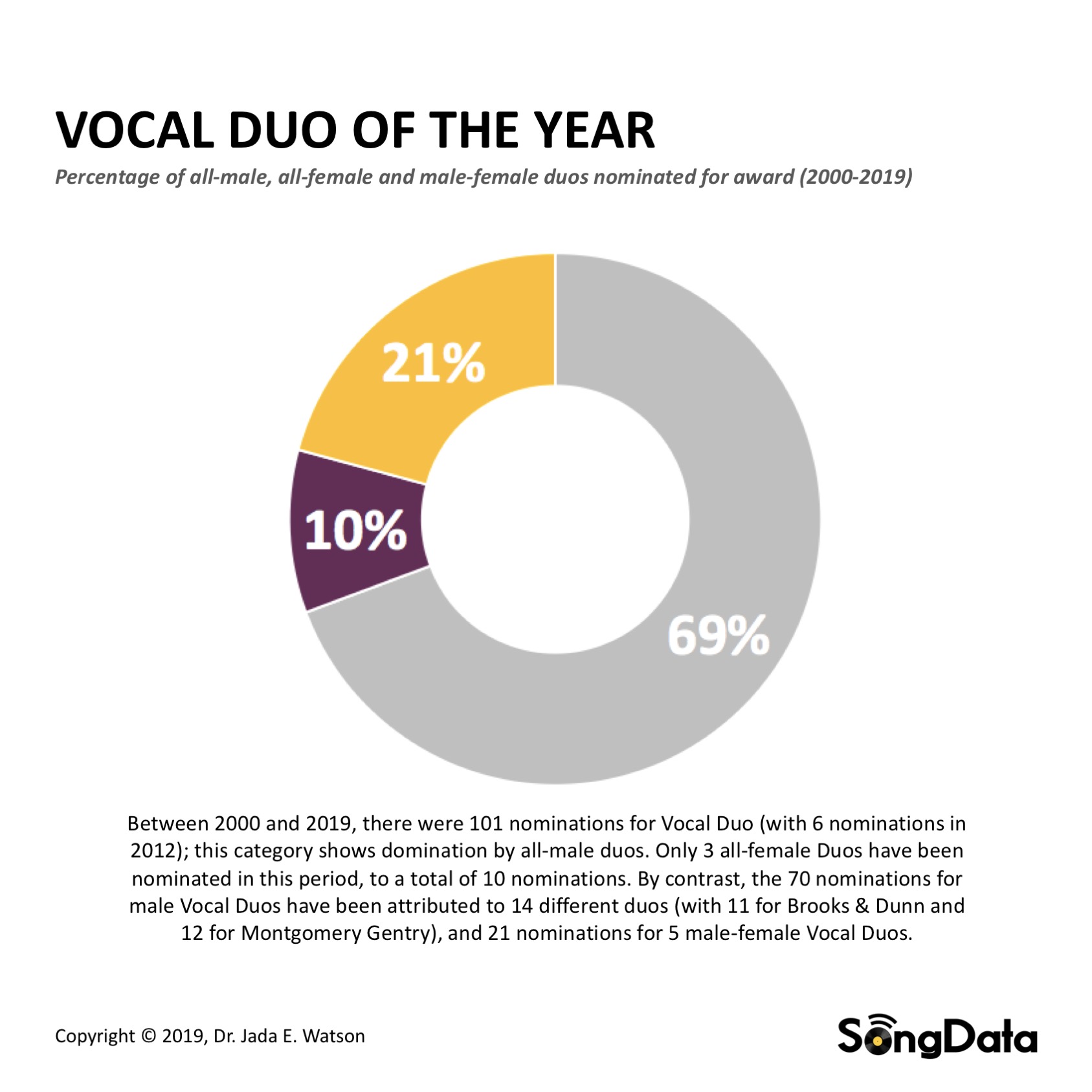 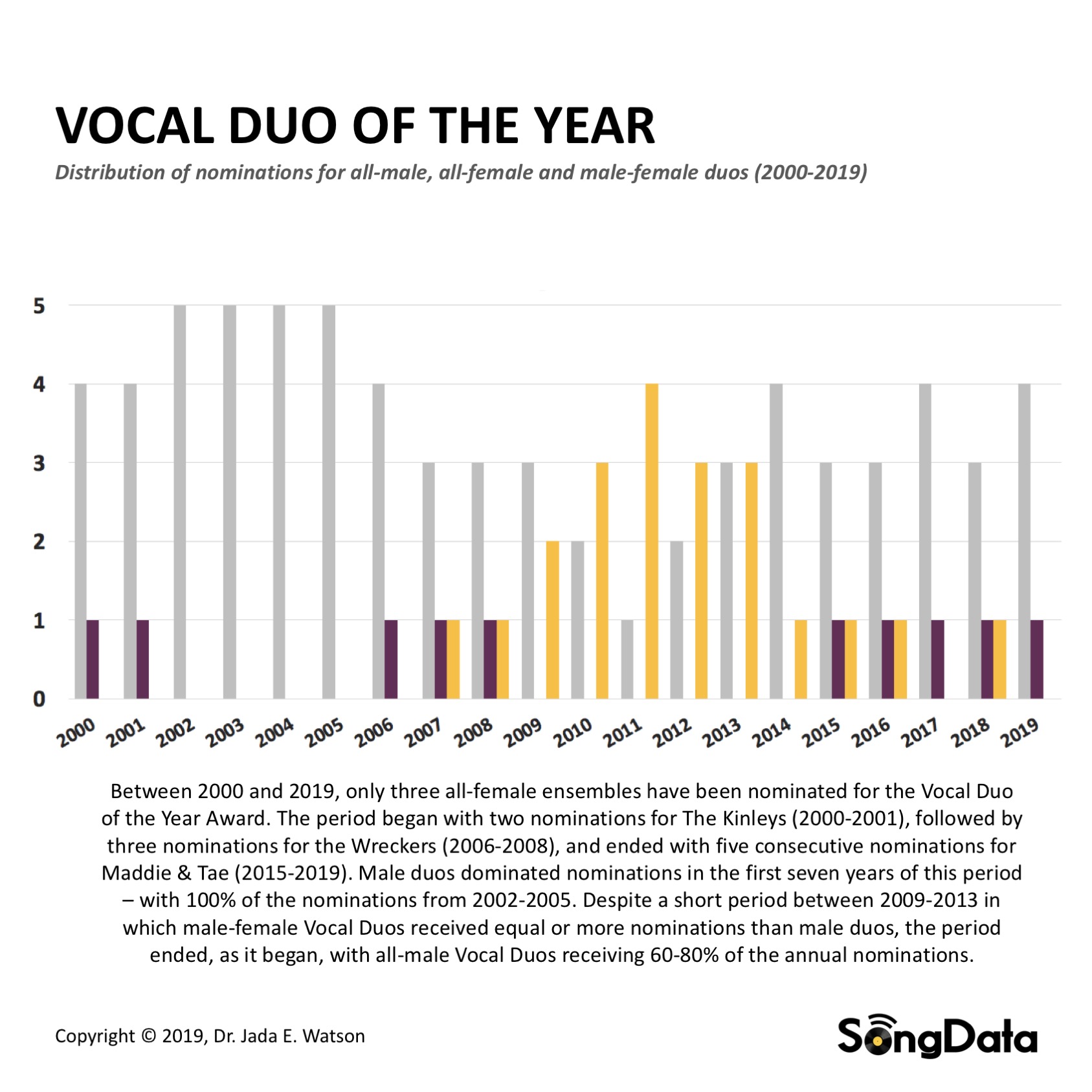 Vocal Group of the Year

This award goes to the group, which is defined as an act, composed of three or more people, all of whom normally perform together and none of whom is known primarily as an individual performing artist.  This Award is based on the musical performance of the group as a unit on a Country single or album release. This year’s nominees include: 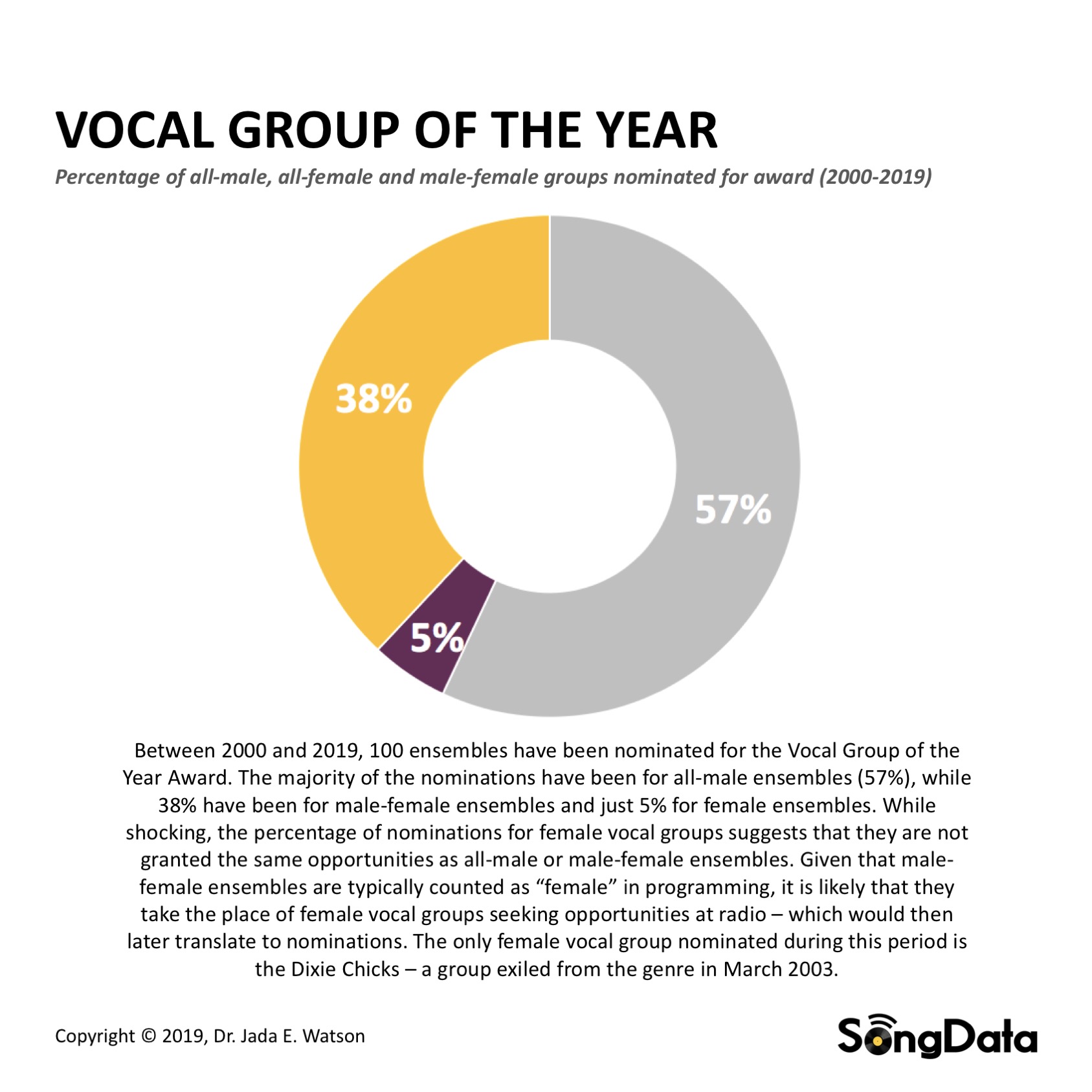 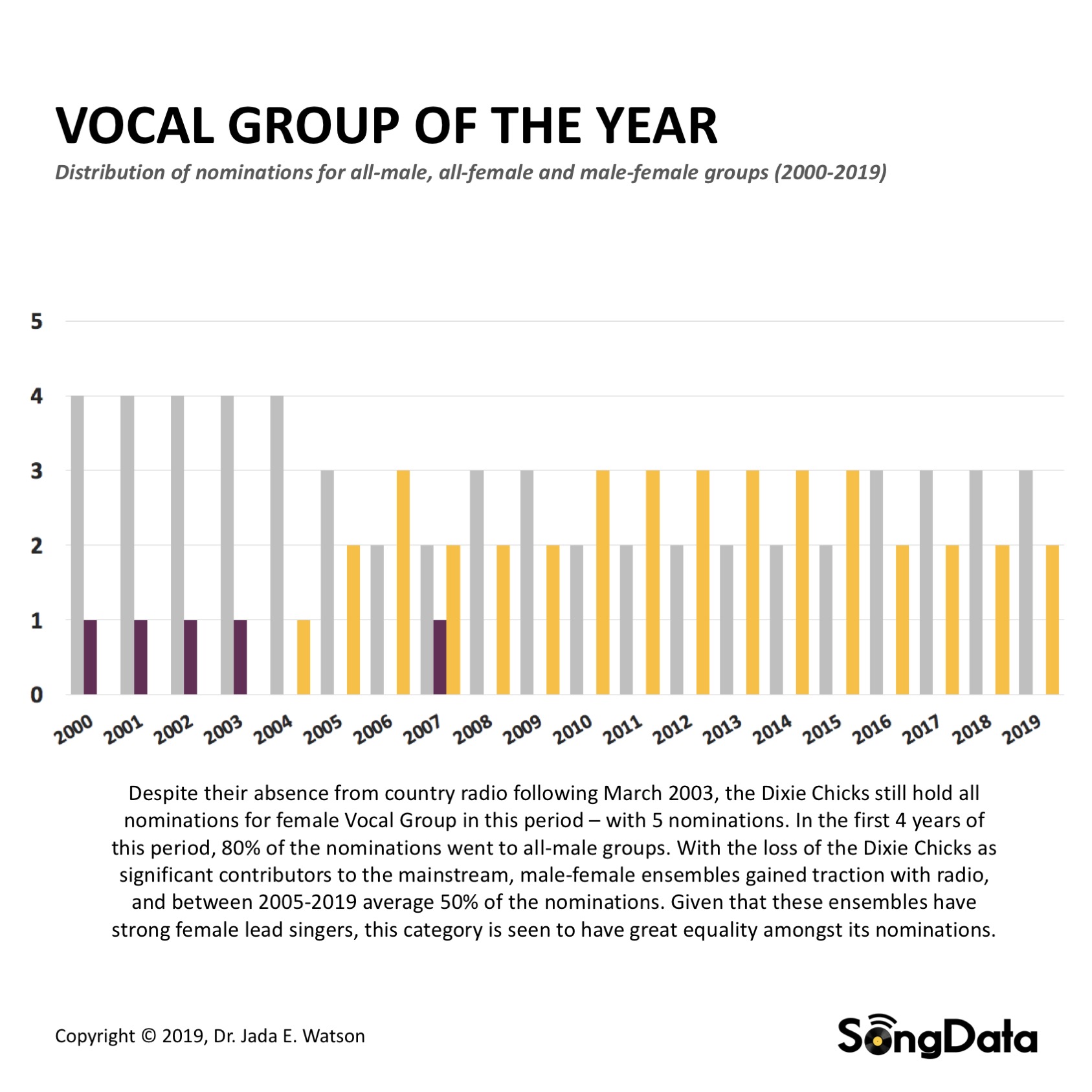 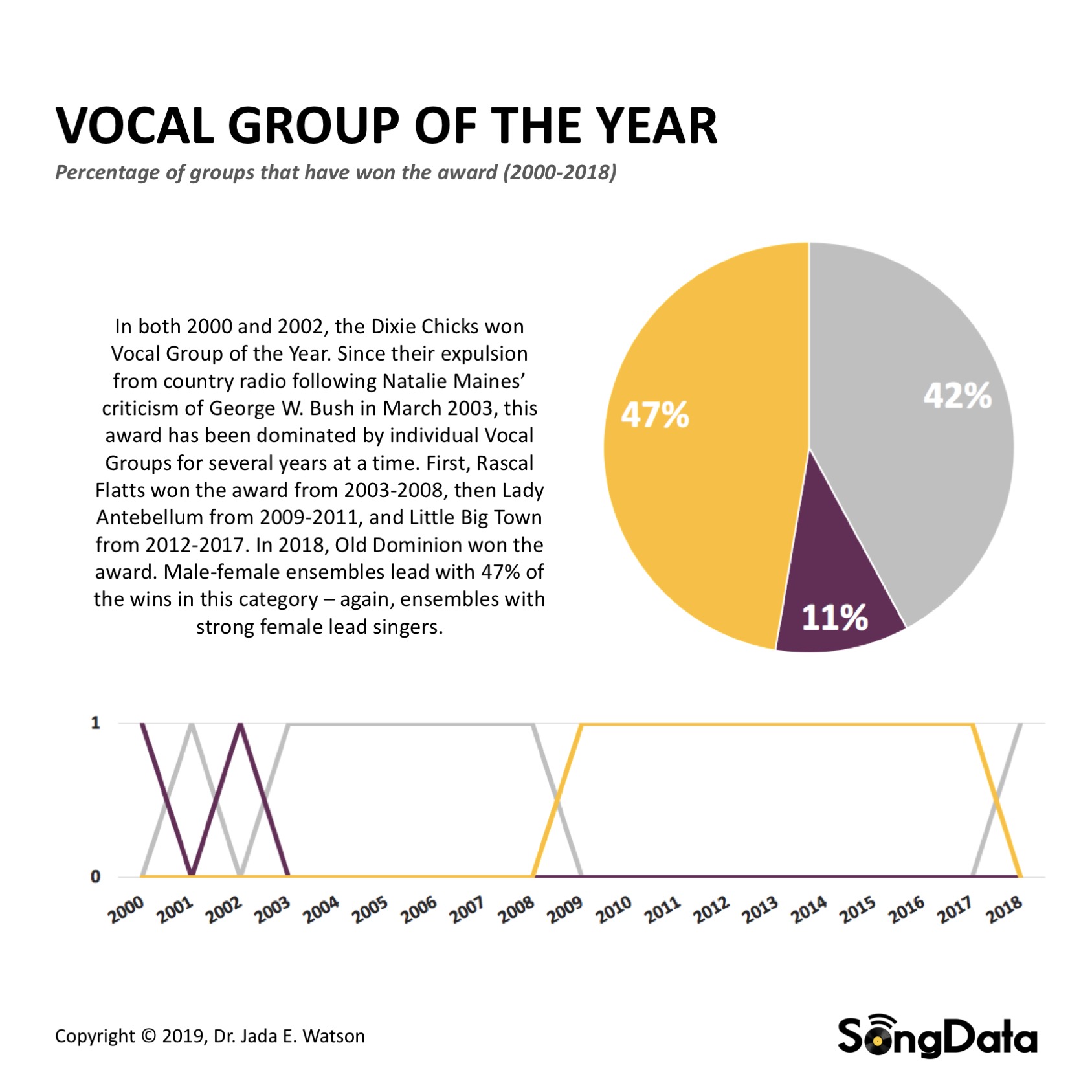 Single of the Year 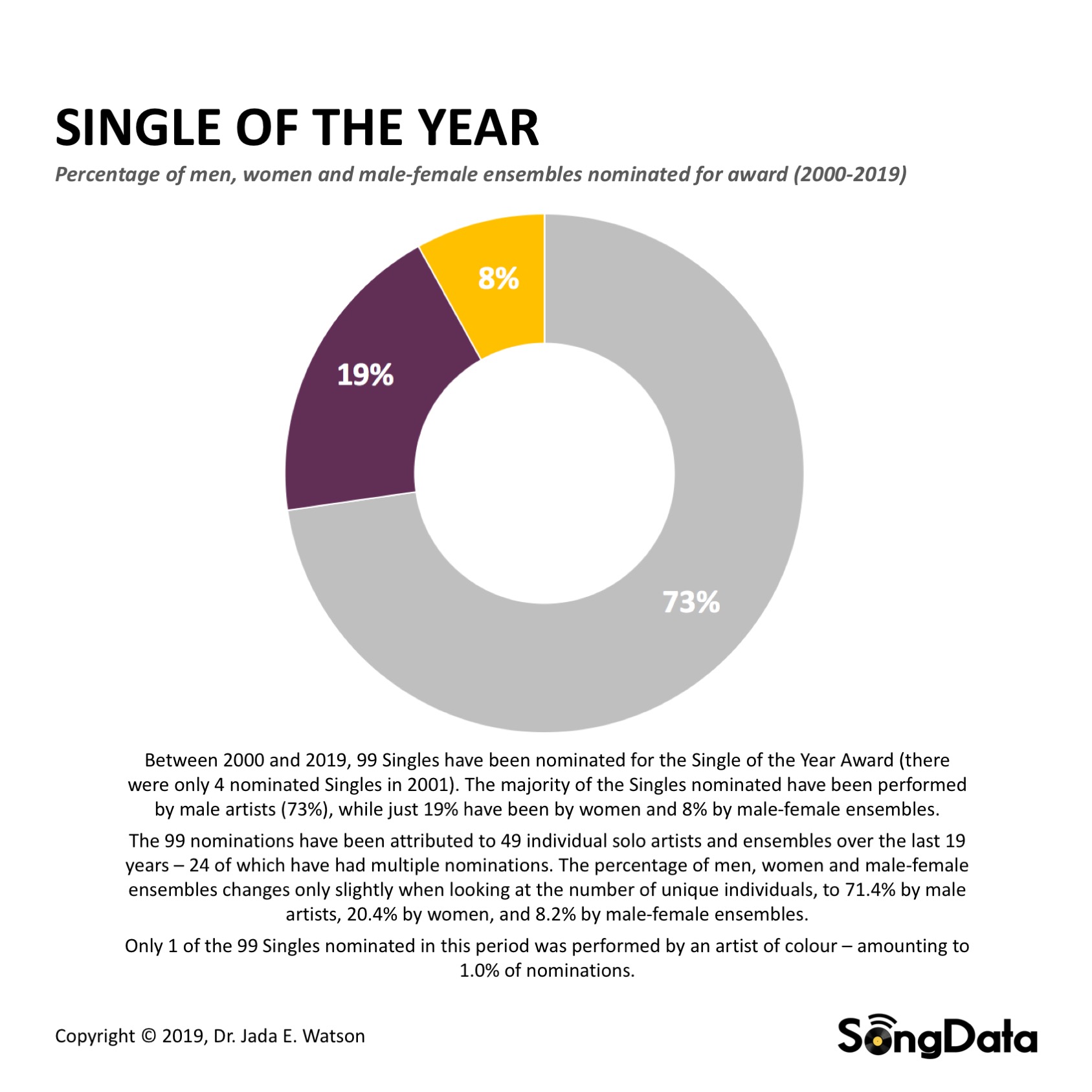 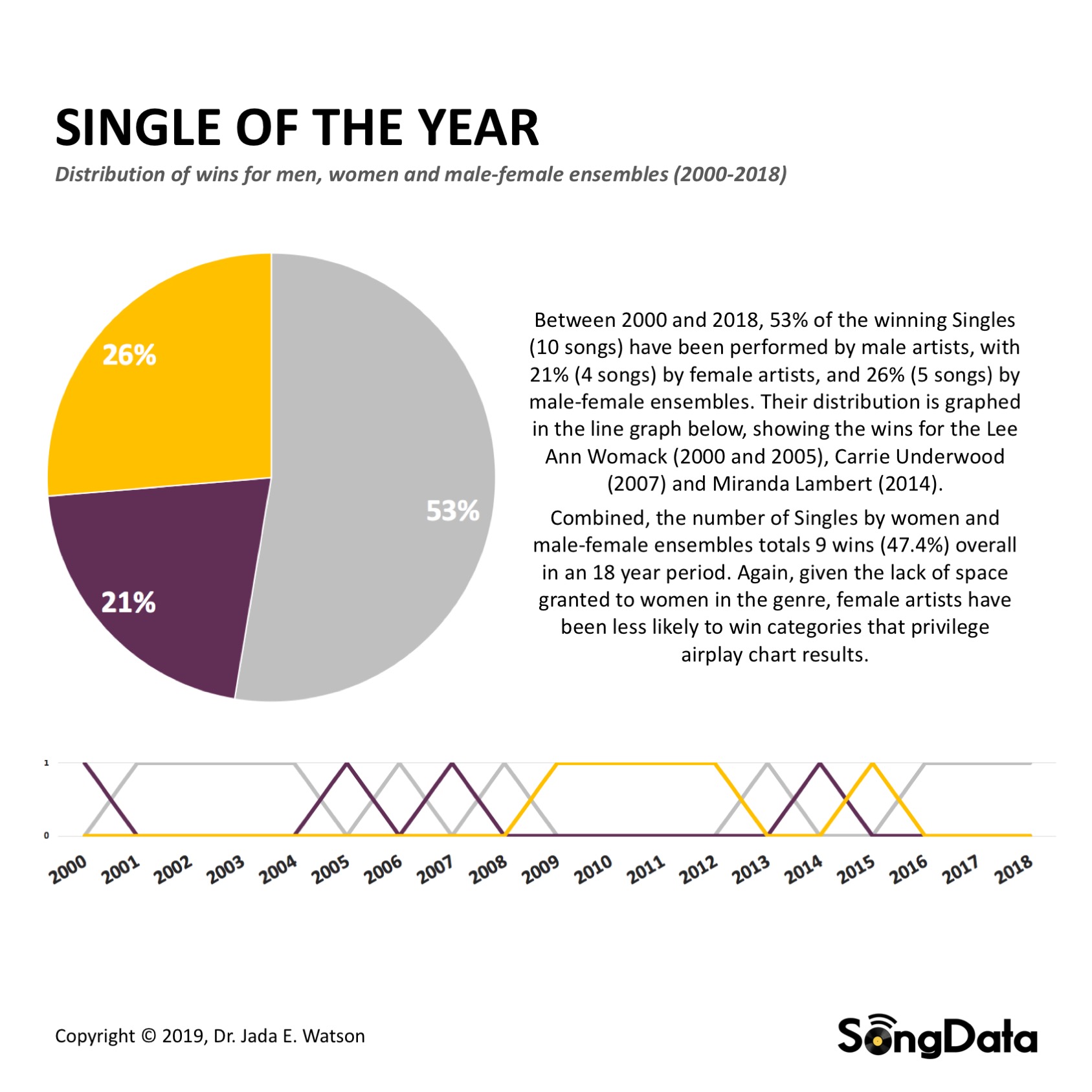 Song of the Year

This award goes to the songwriter(s) and is for artistic achievement in songwriting. Songs must have original words and music, and their eligibility is “based upon the song’s Country singles chart activity.” This year’s nominees include: 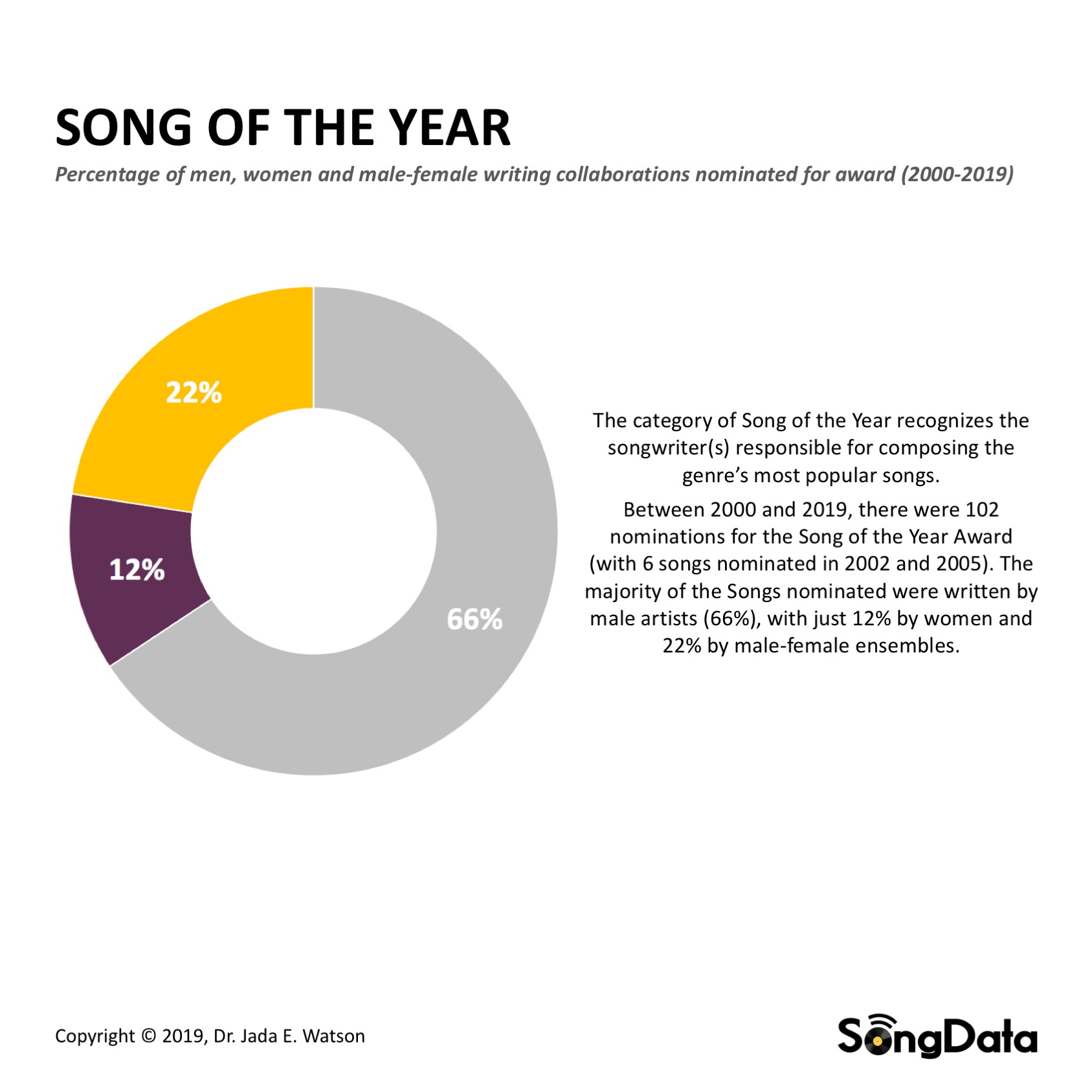 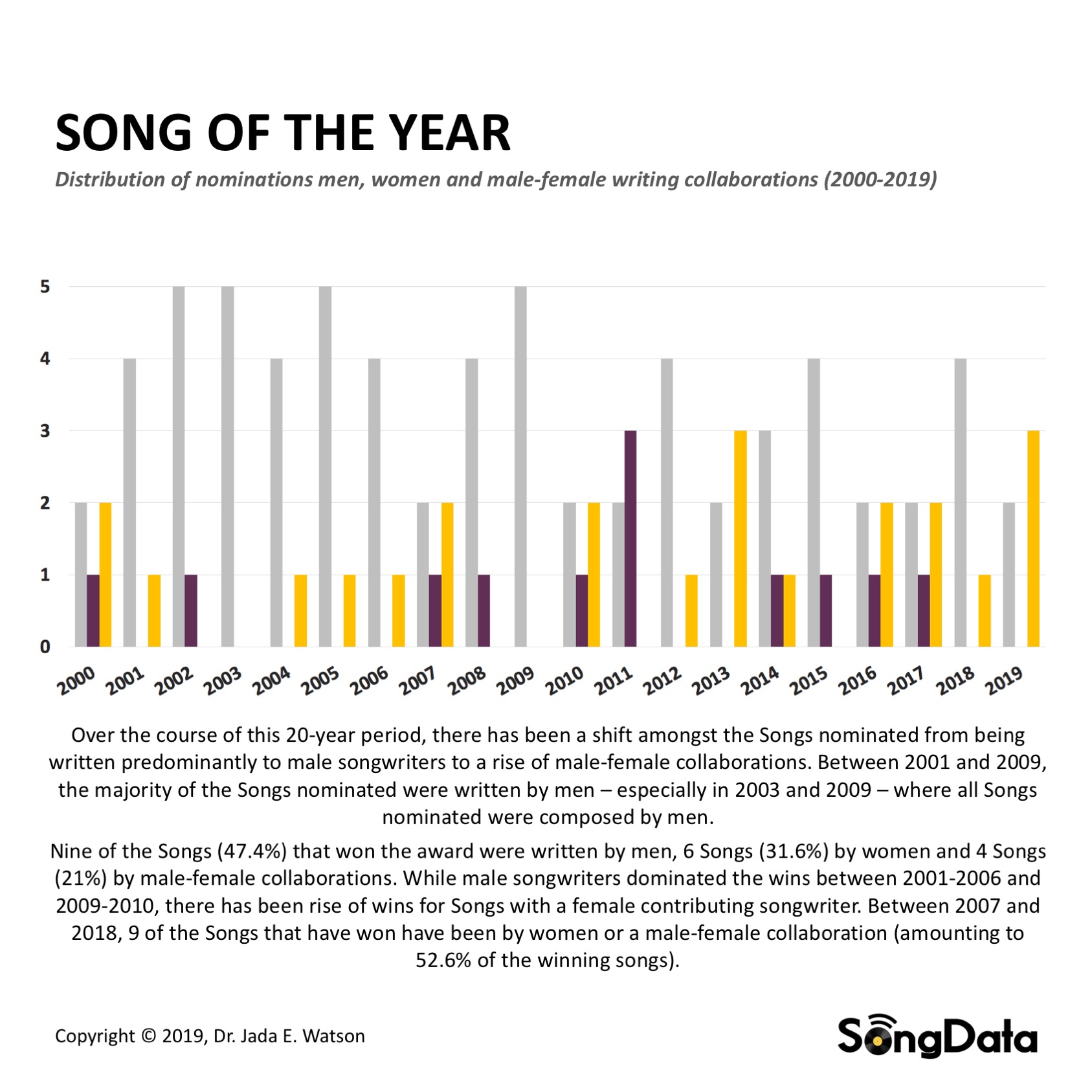 Musician & Musical Event of the Year

Musician of the Year goes to a musician known primarily as an instrumental performer.  The eligibility criteria for this award stipulate that “a musician must have played on any combination of five albums or singles that have appeared in the Top 10 of the Country album or singles charts from Billboard’s Country Airplay Chart, Billboard’s Hot Country Songs Chart, or Country Aircheck Chart, or be certified Gold by RIAA on an album or single released during the eligibility period.” Musicians also credited as producer on are not eligible. Voting is restricted to members in the Musician, Composer, Producer/Engineer/Studio, and Artist Categories of CMA Membership. This year’s nominees include:

Musical Event of the Year goes to each artist and producer.  A Musical Event is defined “as a collaboration of two or more people either or all of whom are known primarily as a Country artist.” The artists must have performed together on a Country single or Country album wherein each artist prominently featured and credited on the initial recording as a collaboration.  It is important to note that live performance events and background vocals are not eligible. This year’s nominees include:

The analysis for Musical Event is based just on the identity of the contributing artists. 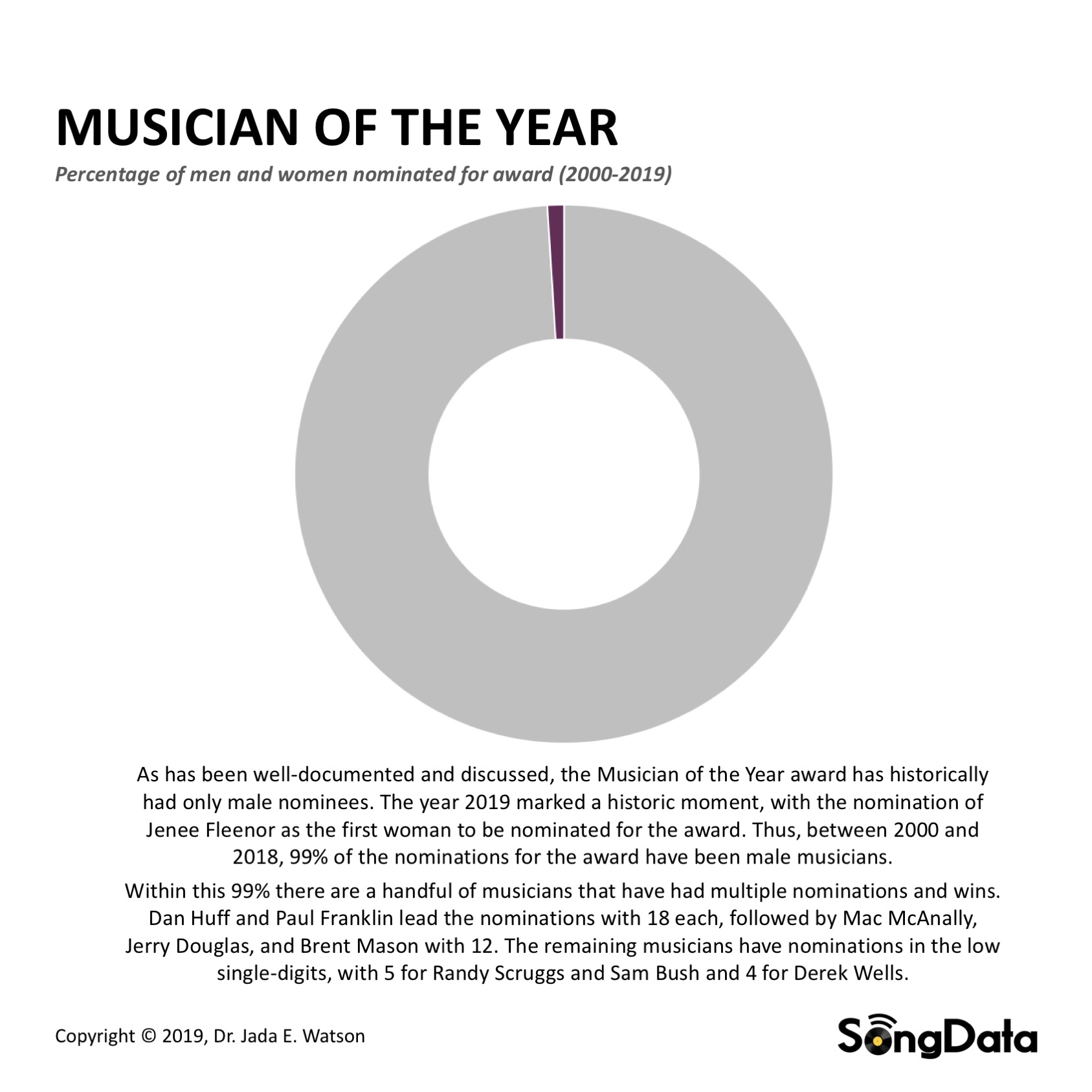 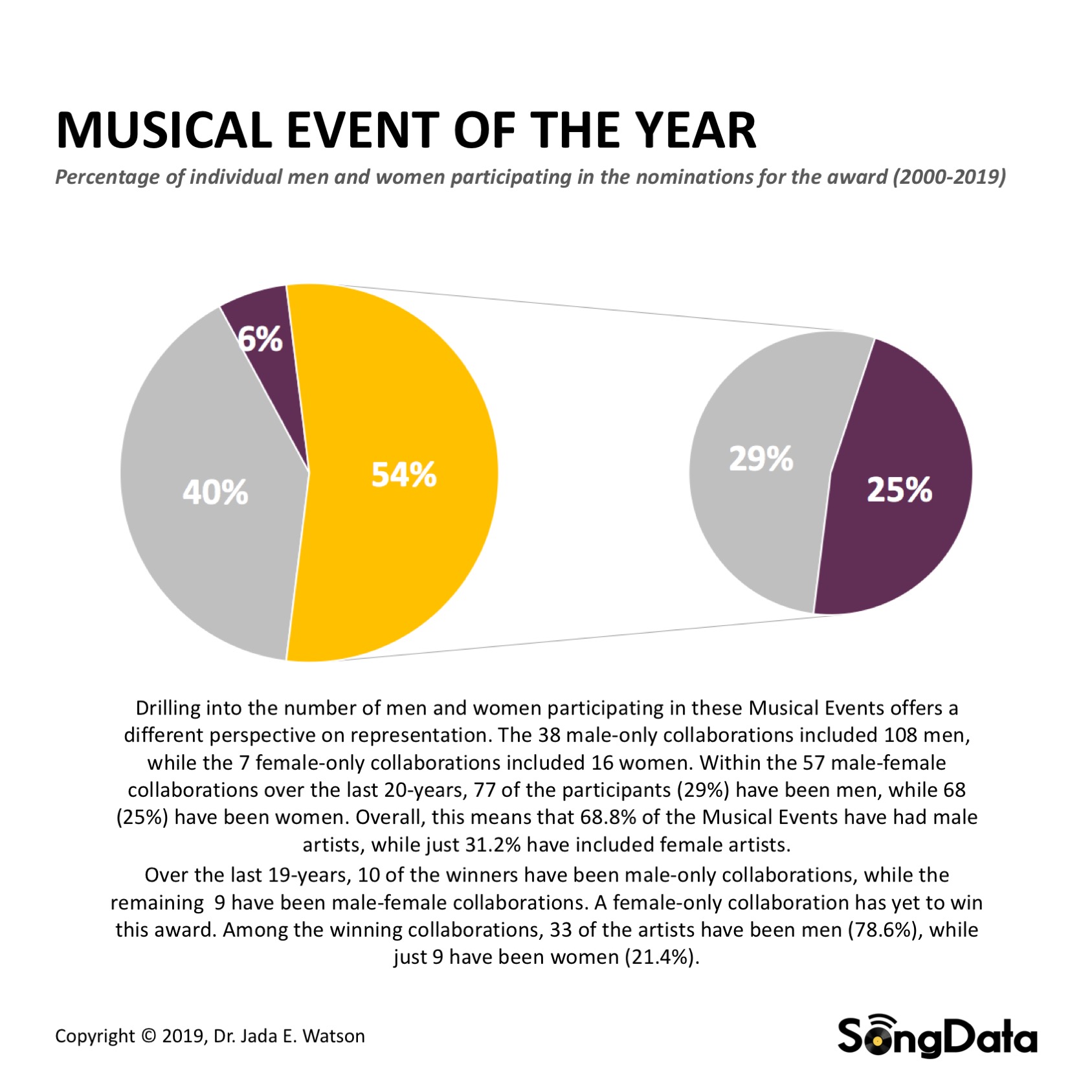 Album of the Year

This award goes to the artist and producer responsible for a Country album as a whole unit, as defined by the criteria for Billboard Album charts.  Evaluation criteria stipulates that the album should be judged on all aspects including: artist’s performance, musical background, engineering, packaging, design, art, layout and liner notes.  In addition “At least 75% of the recordings on the album must have first achieved national prominence during the eligibility period.” This year’s nominees include: 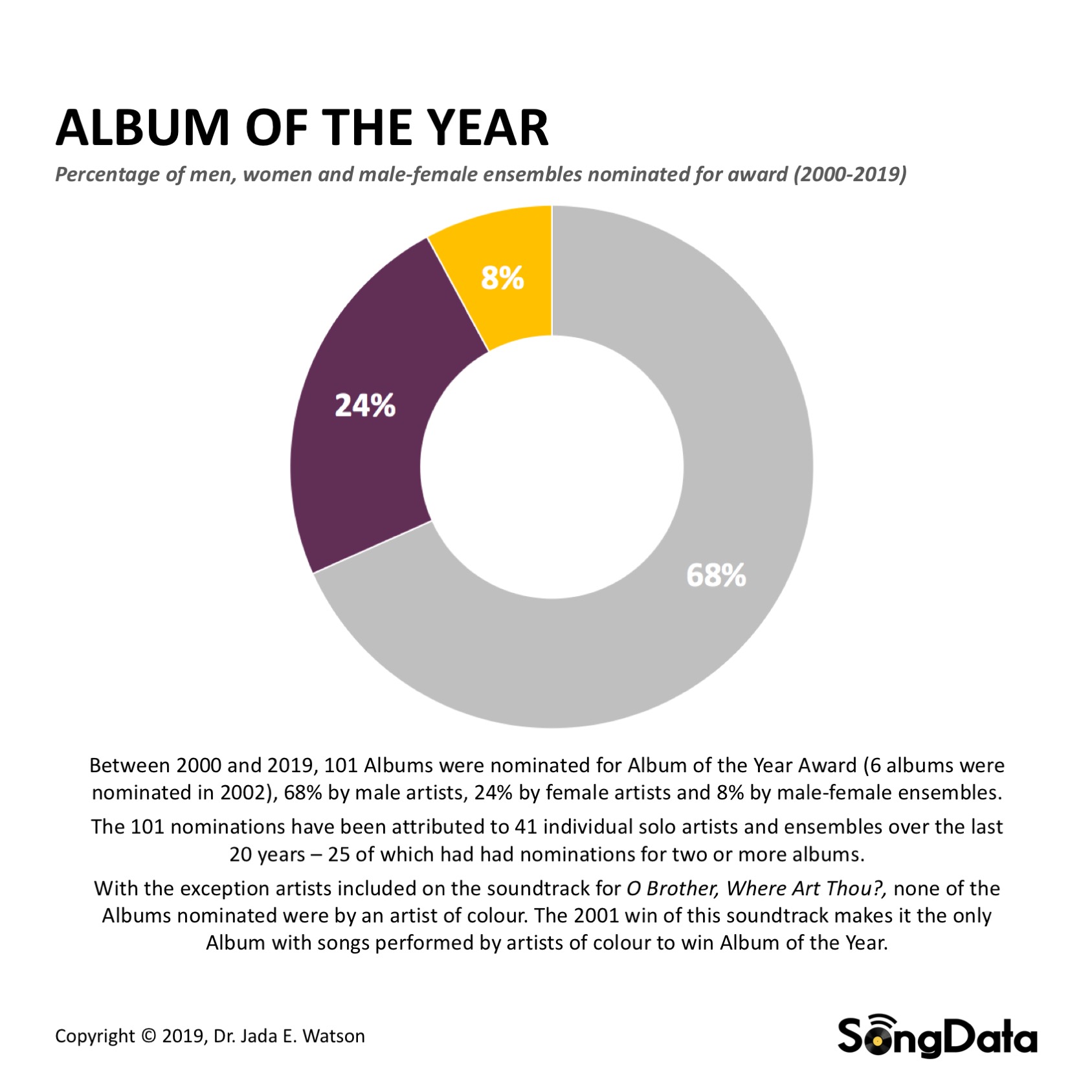 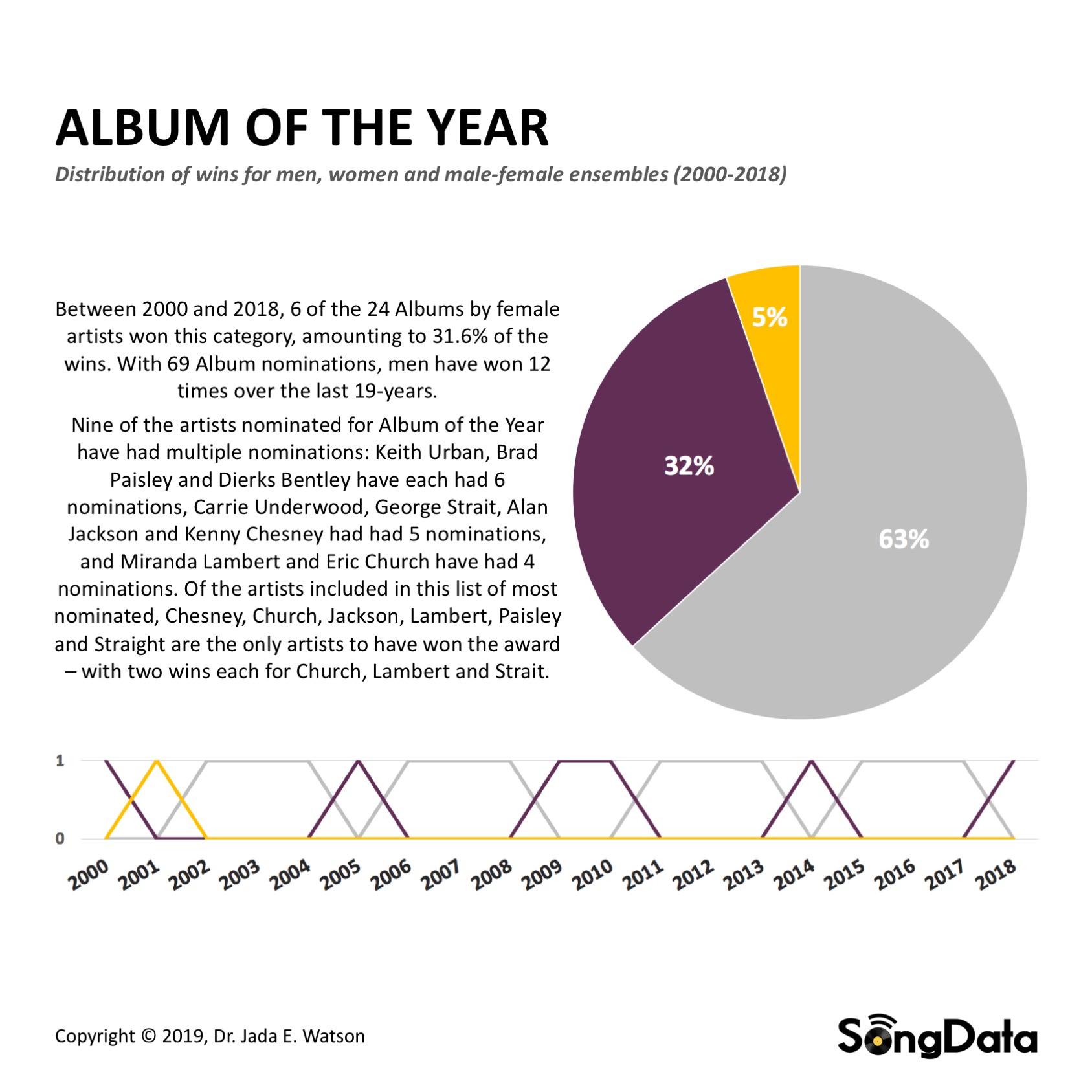 Entertainer of the Year

This award goes to the artist.  The artist is awarded for “displaying the greatest competence in all aspects of the entertainment field.” Voters should be considering “not only to recorded performance, but also to the in-person performance, staging, public acceptance, attitude, leadership, and overall contribution to the Country Music image.” This year’s nominees include: 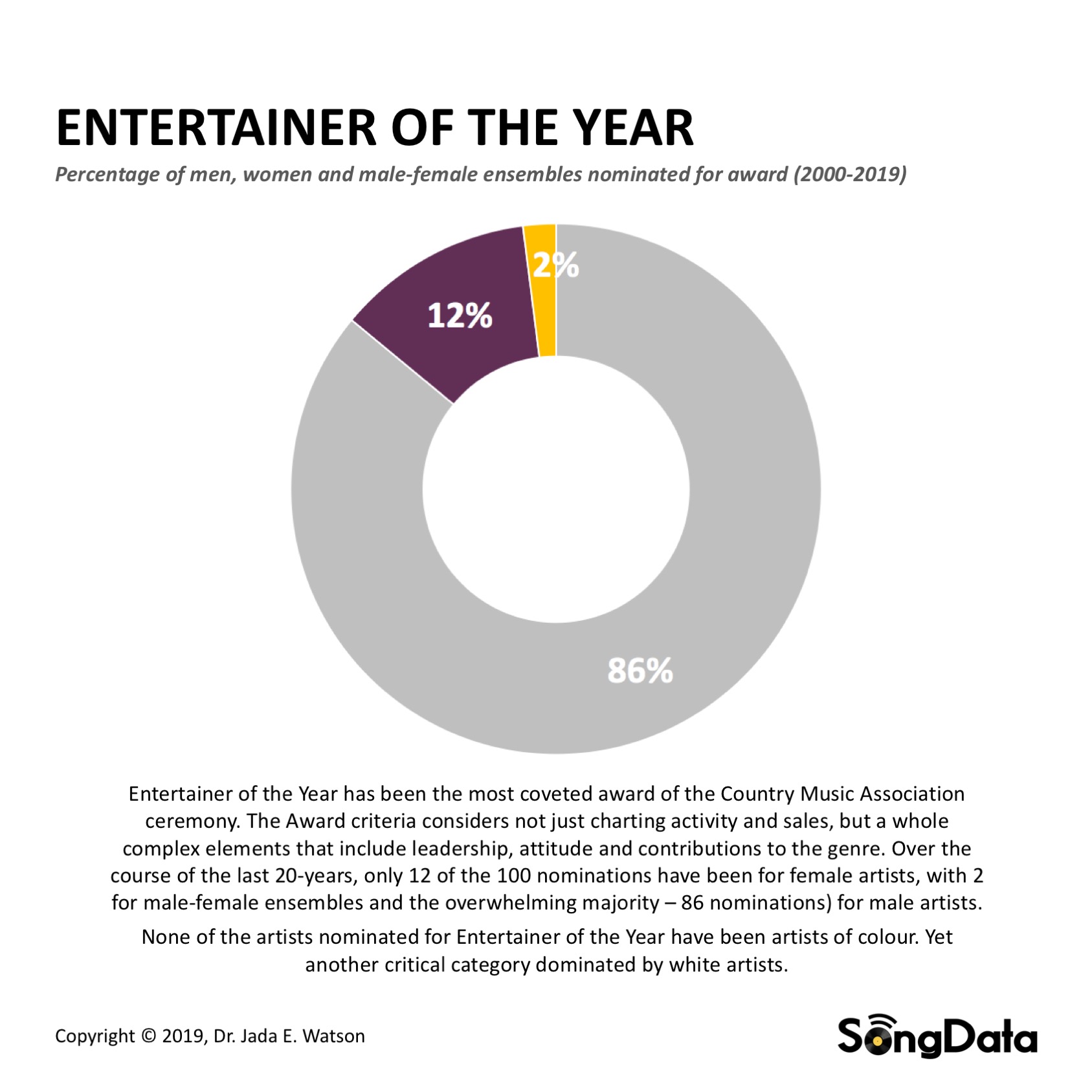 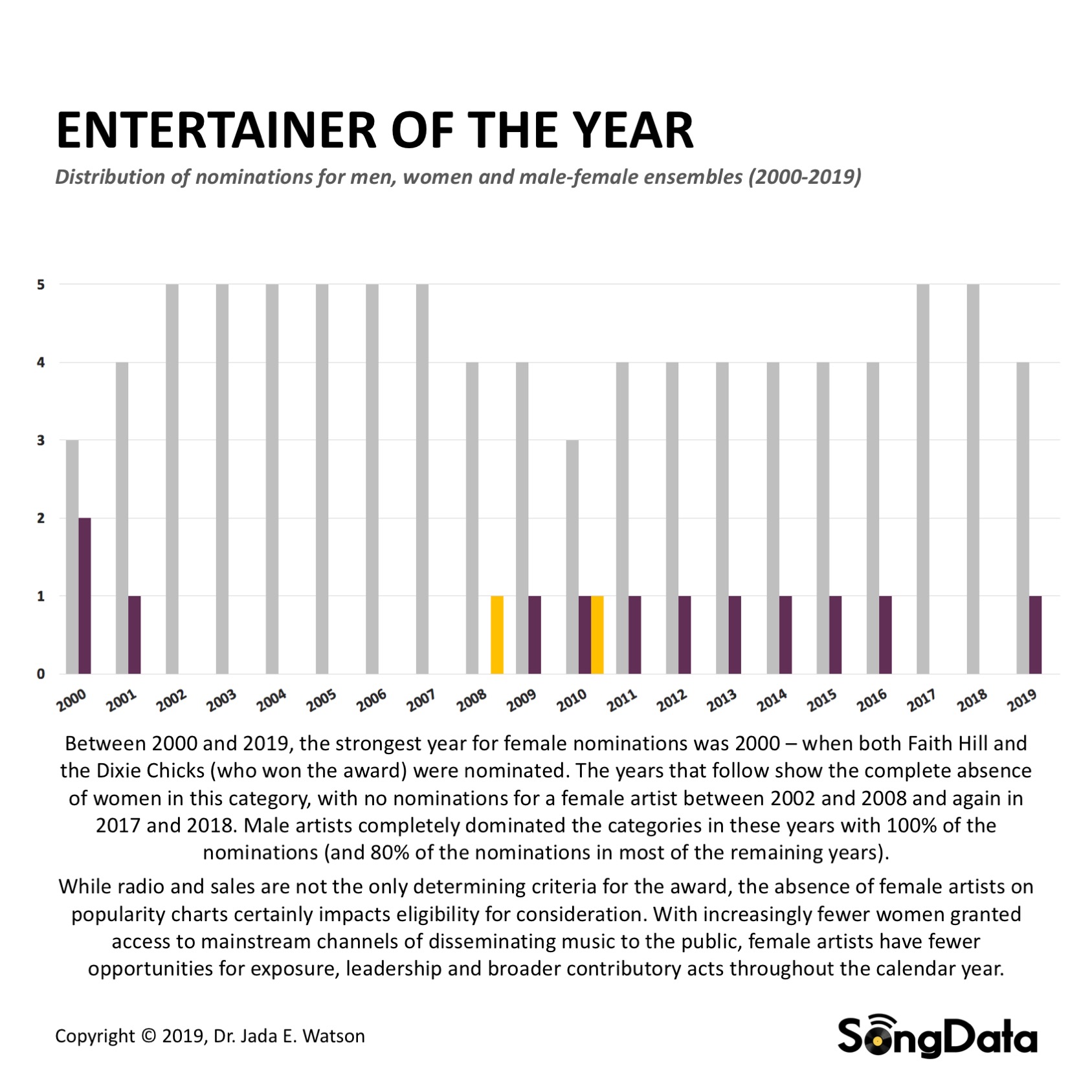 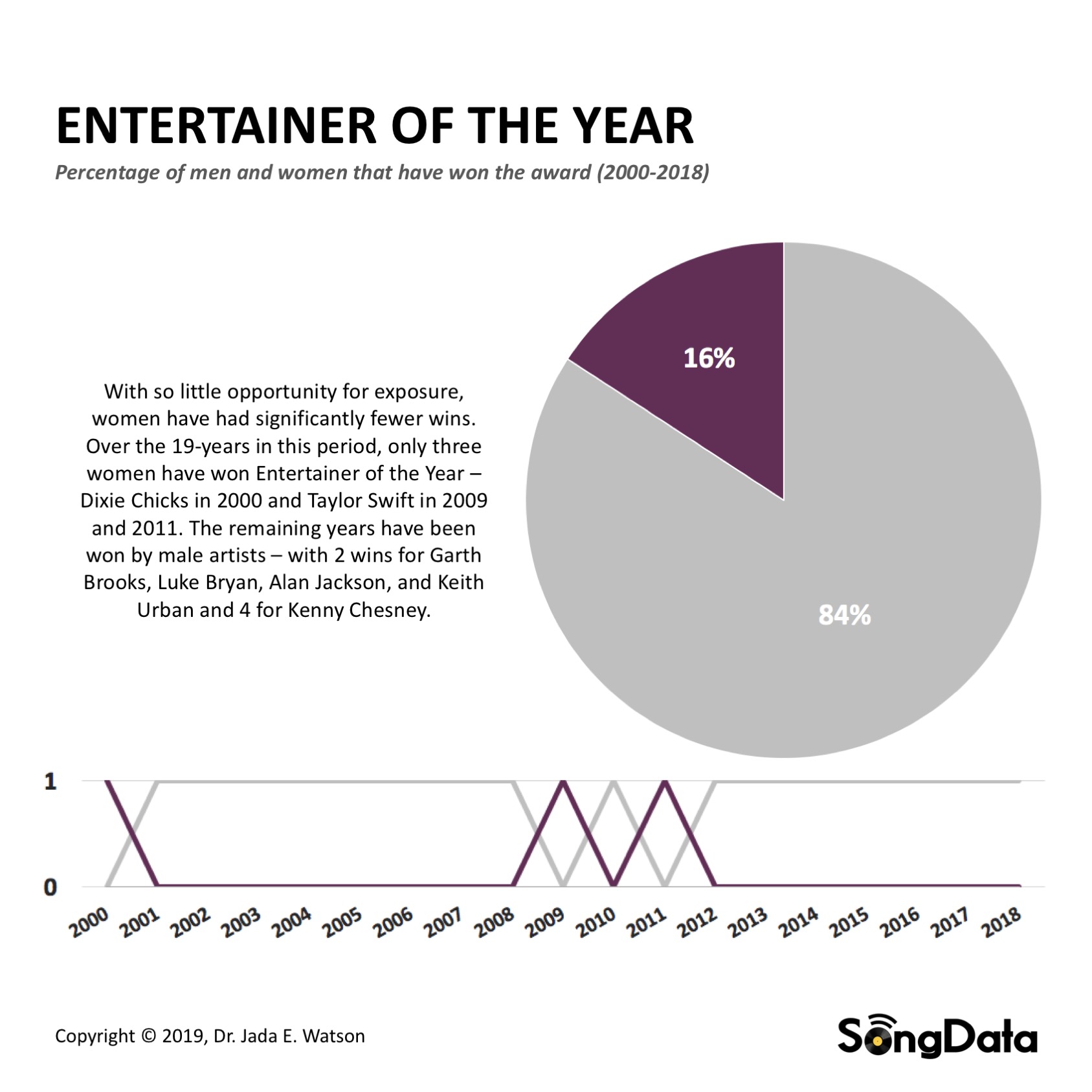 Inquiries and requests to use or reproduce graphics can be sent to Jada Watson at info@SongData.ca.